Several days ago I had asked Brad’s doctors if they could make an exception to the isolation rules of the bone marrow transplant unit and let him see the girls. They assented, but at the time Brad was still feeling sick enough that he wasn’t sure it would be a good idea. Now that he is walking more steadily and more alert, though, I suggested again that they come in to see him, and he felt more ready.

This afternoon we had a very happy and emotional reunion, all four of us. I waited until very close to the visit time to tell the girls (lest anything come up that would force us to postpone) and when I told Lucy, I said we were going to see someone and asked her who in the world she would most want to see. Her eyes and her smile both got wide and she said, “Daddy?”  (When he heard this, he seemed very flattered to be ranked above Taylor Swift.)

We arrived at the family visits room on the oncology floor to learn that an eye doctor had shown up to visit Brad just as he was leaving to visit with us, so we had to wait a bit while Brad got eye drops—which, in the event, made his eyes an unearthly and unsettling green color (with invisible pupils). His eyes were almost all of Brad that the girls could see; the protocol of visits demands that Brad wear a hat, gloves, gown, mask, and booties over his socks. At first both the girls found the weird-looking eyes a bit offputting, but some hugs (pictured) broke the ice. Irrepressible as usual, Lucy was so excited she could not stop dancing in the family visits room. Brad can’t see much but he could definitely see the movement of her dancing. Lucy’s exuberance was unusually, as everyone else—including the nurses—shed plenty of tears, but they were happy ones. 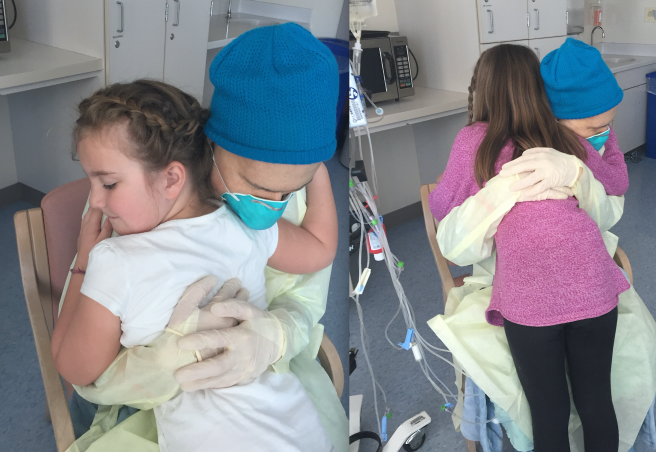 We’ve had a lot of tough days and there will be more ahead, but this was a good one. And the girls and I are going back to see him again tomorrow.

12 thoughts on “Father and child reunion”