Yesterday was an unusually busy and eventful day at the hospital. Since generally things there move slowly, I wasn’t expecting the various medical teams to get Brad’s new treatment rolling as fast as they did. But by 9:30, the transport team was at Brad’s room to take him down to the Interventional Radiology department, where he would get his new chest catheter. There had been some debate between giving him a port (under the skin) or what is called a tunneled catheter, with external lines. He already has one of the latter, and they decided to give him a second one, just on the other side of his chest. The port would have required a week of healing, thus further delaying his treatment, so the new catheter it is. (He’ll retain the first one, which is smaller, for delivery of his many IV medications and the nutrition he is still getting; he hasn’t been able to eat for two weeks.) The new catheter is a much bigger gauge than the pre-existing one; they need a bigger tube to do the photopheresis treatment effectively and efficiently.

Brad was very anxious about the procedure and got quite a bit of Ativan to help with that. Then he was well and thoroughly sedated with Fentanyl during the procedure itself. It must have worked great, because when he woke up he asked me when they were going to do it and was surprised to learn that it was done. He remained fairly out of it for the rest of the day, not surprisingly.

I thought the insertion of the catheter was as much prompt action as the hospital was likely to muster in a single day, and Brad’s nurse had told me that he expected the photopheresis to start on Tuesday (thanks to the upcoming holiday weekend). But shortly after we arrived back at Brad’s room, the apheresis doctor stopped by to ask if Brad had gotten the catheter placed and say that her team would be back in a couple of hours to start the treatment. They arrived at 2pm, bringing a huge rolling unit that looks like something out of 1980s scifi, complete with turning dials, spinning parts inside, and lots of R2D2-like bing and boop noises. 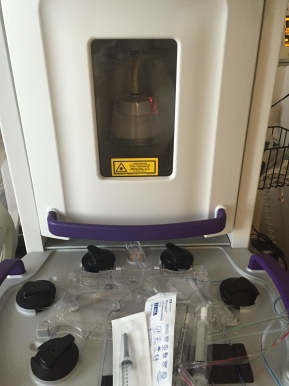 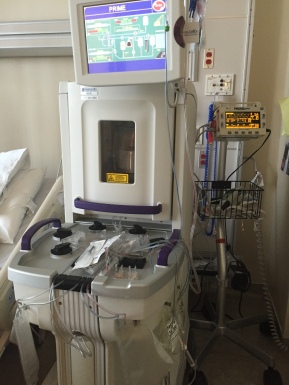 This is the photopheresis machine, a self-contained unit that pulls out Brad’s blood through the new catheter line, sorts it, treats the T-cells with radiation, and returns all his blood to his body. The process takes about two hours (plus some time for the machine to warm up). By coincidence, the photopheresis nurse was the same nurse who worked with James when he donated stem cells (which is done by apheresis, using a similar machine). Brad will have a second treatment today, and then two every week going forward.

Brad more or less slept through the whole photopheresis, thanks to a second dose of Ativan. He also dozed his way through a visit from the eye doctors, who felt the new lenses are starting to work and his eyes look better, and from his oncologist, who has been out of town but came by to see how he’s doing and talk to us about the photopheresis.

I’m very glad the hospital managed to move fast to get Brad started on the treatment he needs, even though we’ve been cautioned to expect progress with his stubborn GVHD to be slow and his future hospital stay to be very long. And now, after that unwonted burst of activity, we return to our regularly scheduled hospital time: waiting.

3 thoughts on “A day of action”